The power to manipulate emotions.

Emotions have been described as discrete and consistent responses to internal or external events which have a particular significance for the organism. They are brief in duration and consist of a coordinated set of responses, which may include verbal, physiological, behavioral, and neural mechanisms.

Empath (Marvel) can sense psionically the emotions of others and control one emotion at a time.
Screen Shot 2013-09-03 at 19.35.28.png
Meggan (Marvel) is a very powerful empath. 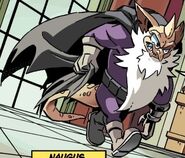 Walter Naugus (Archie's Sonic the Hedgehog)
Add a photo to this gallery
Retrieved from "https://powerlisting.fandom.com/wiki/Emotion_Manipulation?oldid=786949"
Community content is available under CC-BY-SA unless otherwise noted.