Digimons use the feelings and the motivations of their partners to digievolve into a more powerful form.

Evolve or changes the form based on emotions

The power to evolve or change the appearance of oneself based on emotional energy.

The user can change the form based on emotions, feelings or wishes. 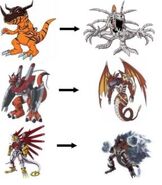 Dark Digievolution occur with a mind clouded with anger, or through dark power, resulting in one evil digievolution from the digimon

D.N.A/digisoul is kind of energy aura that allows a Digimon to grow stronger, and is tied into a human's emotions.

Bruce Banner (Marvel Comics) becomes The Hulk when he is excited or angry.

Enraged upon witnessing the death of his/her mother, Mikoto, Corrin (Fire Emblem Fates) transforms into a dragon.
Add a photo to this gallery
Retrieved from "https://powerlisting.fandom.com/wiki/Emotion_Transformation?oldid=1371179"
Community content is available under CC-BY-SA unless otherwise noted.