Bruce Banner/Hulk's (Marvel Comics) strength depends on how angry he is at any given time.

"I'm a rage-aholic! I can't live without rage-ahol!"
― Homer Simpson (The Simpsons)

The circumstance in which the user's strength is dependent on maintaining a certain emotional state. Variation of Telekinetic Strength.

The user's power is dependent on maintaining a certain emotional state (fear, anger, etc.); should these states be undermined, the user may become weaker and easier to neutralize. This may also be affected by feelings and moods.

In several cases, this can also apply to others' emotional states, which the user draws power from.

Yuki Terumi's (BlazBlue) power and existence are entirely dependent on the hatred others feel for him.

Before he trained to bring it out, Son Gohan's (Dragon Ball Z) power level was entirely dependent on his mood, being at his most powerful when enraged and losing said power when he calms down. 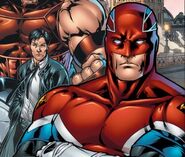 Freddy Krueger (A Nightmare on Elm Street) becomes more powerful depending on how many people fear him.

As a succubus, Kurumu Kurono (Rosario + Vampire) is dependent on love to survive.

Knox's (Heroes) strength is entirely dependent on the fear around him.

On Earth, Sadao Maou (The Devil is a Part-Timer!) requires the fear of humans to recharge and maintain his magic. 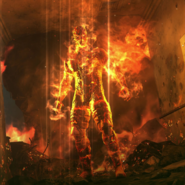 The Man on Fire's (Metal Gear Solid V: The Phantom Pain) power is fueled by his hatred of and desire for revenge on Big Boss for defeating his former self, Colonel Volgin.

Shigeo Kageyama/Mob (Mob Psycho 100)
Add a photo to this gallery
Retrieved from "https://powerlisting.fandom.com/wiki/Emotional_Consistency?oldid=1496251"
Community content is available under CC-BY-SA unless otherwise noted.