The ability to split into two or more people, each having a specific emotion. Combination of Replication and Emotion Embodiment.

The user is able to split into two or more bodies, each having a specific emotion, the copy has the same personality, with only a few differing details. Being the incarnation of the user's other emotions, their copy is shown to be much more emotional and sincere. When letting their emotional side out, the original person doesn't change.

This ability could be used in fighting as it can give an advantage to fighting a person who has no one to back them up. It can also give help when doing an activity that needs more people (e.g. going on a date with a girl and doing work simultaneously). However, the twin has free will, which means a user must be in harmony with themselves to make the ability work. 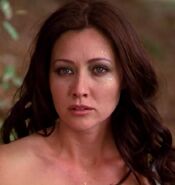 Psycho Rudy (Misfits) is the third, sociopathic doppelgänger of Rudy. He's crueler and able to absorb the two Rudy's and suppressing them when they are joined.

Geoff (Misfits) has the same power like his son, Rudy.

Nega-Scott (Scott Pilgrim: Gets it Together) is the manifestation of all of Scott Pilgrim's callousness, spite, faults, and emotional flaws.
Add a photo to this gallery
Retrieved from "https://powerlisting.fandom.com/wiki/Emotional_Manifestation?oldid=1425073"
Community content is available under CC-BY-SA unless otherwise noted.