Claire Dixon (Marvel Comics) was forced to become host to the symbiote known as Raze, a spawn of the Carnage symbiote that was forged with the use of a ritual through the black magic of the Darkhold.

Utilize a symbiotic suit of armor with mystical properties.

The power to use mystically-enhanced symbiotic armor. Variation of Power Suit, Symbiote Creation and Science-Magic Mixture. Combination of Enchanted Armor and Symbiotic Costume.

The user possesses an entity that is symbiotically bound to their body and acts as an exoskeleton, with this entity having been empowered by mystical / magical / esoteric forces. These forces allow the user, even if they are not normally capable of using magic, to utilize it through said symbiotic entity, and may negate or alter weaknesses that the entity usually would have.

Jaime Reyes (DC Comics) is bonded to the Blue Beetle Scarab, a sentient mystical artifact that can transform into a Power Suit.

Al Simmons/Spawn (Image Comics) is host to K7-Leetha, a mystical parasite from Hell.

Both Eugene "Flash" Thompson and Andrea Benton (Marvel Comics), hosts of the Venom and Mania symbiotes respectively, have had their symbiotes marked with the demonic influence of a Hell Mark at different points.

Cletus Kasady/Carnage (Marvel Comics) augmented his symbiote with the dark magic of the Darkhold once he learned of his destiny as the Chthonic chosen-one "Red Slayer," capable of using his potential to create spawns that he could control by himself, such as the Raze symbiote, and eliminating his symbiote's weakness to sonic damage. 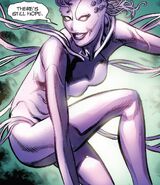 Jubulile van Scotter (Marvel Comics) gained access to heightened magical ability, including the ability to absorb other enchanted symbiotes, when given access to the full power of her symbiote.

Upon being further enhanced by the Darkhold, Jubulile van Scotter (Marvel Comics)'s symbiote was able to absorb even greater levels of light and dark magic, even able to banish the demon sorcerer Chthon singlehandedly.

The Witchblade (Top Cow) is the result of the union of the light-based Angelus and the shadow-based Darkness during a time of truce, and takes the form of a mystical, sentient gauntlet that can provide armor to its current host.

Black Beetle (Young Justice)
Add a photo to this gallery
Retrieved from "https://powerlisting.fandom.com/wiki/Enchanted_Symbiotic_Exoskeleton?oldid=1745505"
Community content is available under CC-BY-SA unless otherwise noted.