Although he was classified as a B-class demon, Younger Toguro (Yu Yu Hakusho) possessed Demon Energy strong enough to melt the flesh off weaker demons and leave a cut on Yusuke's face.

Produce a massive amount of energy that causes damaging effects.

"Great... he can dice me up with nothin' but the force of his energy."
― Yusuke Urameshi (Yu Yu Hakusho) in response to Younger Toguro's Demon Energy.

"It's a different dimension!! The whole planet shook when their blades collided..."
― Haru Glory on his father, Gale Glory and Gale Raregroove/King (Rave Master)

"What an amazing display...Even as an A Rank, It's taking all I've got to stay standing. I'm about to lose my mind from just the magical reverberation!!"
― A cameraman on Sung Jin-Woo and the Ant King during their fight (Solo Leveling)

The power to generate enormous amounts of energy to crush/damage anything/everything in the surrounding areas. Technique of Energy Manipulation and Energy Generation.

User can use their energy to cause crushing or repelling effects on objects or areas, can cause a target to be paralyzed by the pressure, induce fear, or even kill with only their energy. They can cause an attack to be negated or have no effect at all.

See Also: Awesomeness Is A Force.

Kenpachi Zaraki's (Bleach) Reishi is so massive it can push the weaker Reishi away thus acting like a force field of armor.

Even in his incomplete form, Sōsuke Aizen (Bleach) can produce crushing amounts of spirit energy, disintegrating normal humans just by being near them.

Even during his first fight with Son Goku, Vegeta (Dragon Ball series) possessed power great enough to shift and twist the very air around him, blow away the nearby clouds, and crush surrounding mountains.

When Cell (Dragon Ball series) was in the process of achieving his Perfect form, his expanding energy created a lightning storm and several waterspouts to emerge around the Tropical Islands.

When Son Goku (Dragon Ball series) first transformed into Super Saiyan 3 on Earth, his sheer power was so great that it caused massive tidal waves and hurricanes and nearly shook the planet apart

Jiren's (Dragon Ball Super) sheer power is so great, that unleashing it caused the entire World of Void, a timeless dimension, to start shaking.

When Jiren (Dragon Ball Super) proceeded to break his limits, he unleashed an explosive storm of fiery ki that burned part of the arena.

When Broly (Dragon Ball Super: Broly) transformed into a Super Saiyan, his power expanded to the point where it was able to destroy the area around him. 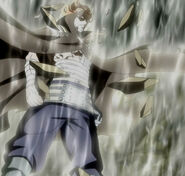 After accessing the Nine-Tails chakra for the first time, Naruto Uzumaki (Naruto) unleashed an explosive amount of highly contracted chakra during his fight with Haku...

...which he repeat during his intense fight with Sasuke.

With only a simple stare, Nagato/Pain (Naruto) unleashed his powerful chakra pressure at Tsunade during their second meeting.

Tobirama Senju (Naruto) does a mean stare at Sasuke Uchiha with only using the force of his chakras pressure.

With his Conqueror/Haoshoku Haki, Shanks (One Piece) was able to damage Whitebeard's Ship with the strength of his will alone.

When Monkey D. Luffy and Donquixote Doflamingo (One Piece) clashed with their respective Conqueror/Haoshoku Haki, they created a powerful pressure that caused shock waves.

After their duel was interrupted by Charlotte Flampe and with it nearing its climax, Monkey D. Luffy and Charlotte Katakuri (One Piece) unleash their Conqueror/Haoshoku Haki, damaging the floors and breaking the nearby mirrors of Mirror World.

Uvogin (Hunter x Hunter) coating himself in his Ren aura.

Both Gale Glory and Gale Raregroove/King's (Rave Master) sword swings possessed so much power behind them that the very planet shook as they collided.

Even with just a flex of his arm, Younger Toguro (Yu Yu Hakusho) was able unleash a wave of Demon Energy that was enough to send Genkai on the defensive.

With only a mere force of his Sacred Energy, Shinobu Sensui (Yu Yu Hakusho) was able to, literally, back Yusuke and Koenma against the wall.

In his Meikai God form, Yakumo (Yu Yu Hakusho: Poltergeist Report) wielded S-Class Netherworld Energy, which was able to greatly destroy the area around him.
Add a photo to this gallery

Michael Morningstar (Ben 10)
Add a photo to this gallery
Retrieved from "https://powerlisting.fandom.com/wiki/Energetic_Pressure?oldid=1519902"
Community content is available under CC-BY-SA unless otherwise noted.