Whenever he activates his Kaio-ken technique, Son Goku (Dragon Ball series) is able to amplify his Ki reserves up to 20 times their natural limit, but at the cost of exhausting his body.

The ability to amplify/concentrate one's energy. Sub-power of Power Level Manipulation. Variation of Power Augmentation. Combination of Energy Manipulation and Quantity Manipulation. Opposite to Energy Dilution.

The user is able to amplify/concentrate the energy they possess, increasing the quantity/amplifying its destructive power.

Vizards (Bleach) can amplify their Shinigami/Soul Reaper powers via Hollowfication.

...and as a full Hollow his powers were tremendously amplified.

Son Gohan (Dragon Ball series), like all Saiyans, is capable of increasing his ki energy in order to battle on a level playing field. 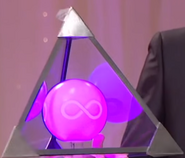 Arcturion (Mighty Med) can also amplify any energy it comes incontact with.