The user can either use various ranged weaponry such as slingshots, bows, guns, cannons etc, as a conduit to manipulate Energy or impose those effects on ranged weapons to enhance them.

As a time traveler, Nathan Summers/Cable (Marvel Comics) has a vast arsenal from the future. 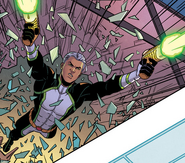 Noh-Varr/Marvel Boy (Marvel Comics) can shoot energy beam from his gun
Add a photo to this gallery
Retrieved from "https://powerlisting.fandom.com/wiki/Energy_Artillery?oldid=1565324"
Community content is available under CC-BY-SA unless otherwise noted.