The ability to generate and project energy spheres. Sub-power of Energy Attacks. Variation of Ball Projection.

The users of this ability can create balls of energy that they can use to launch, as part of a melee attack, or as a way of transportation.

Wyatt (Charmed) with an energy ball.

Omega Shenron (Dragon Ball GT) is able to form the negative energy of the Dragon Balls in order to form his Minus Energy Power Ball.

Baby (Dragon Ball GT) is able to turn the Tuffle's hatred for the Saiyans into negative energy, allowing him to form his Revenge Death Ball.

As his most signature ability, the Nihilanth (Hλlf-Life) can collide his hands together and launch a barrage of energy orbs at Gordon, but once his power has been weakened, he can only launch one energy ball.

Alien Controllers (Hλlf-Life series) can project normal energy balls at their enemies, and ones that follow specific targets.

Chū (Yu Yu Hakusho) is able to use mix his alcohol with his demonic energy in order to generate his Orge Boulder. 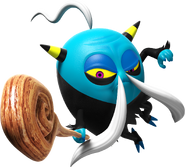 The Nitro Blasters (Sonic X) generate a multicolored energy ball that Sonic can kick at opponents. 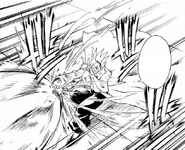 Activating the Ghost ÄRM, Howling Demon allows Chimera (Marchen Awakens Romance) to turn her hand into a salivating monster that can shoot balls of energy.

When Domon Kasshu (Mobile Fighter G Gundam) enters his God Gundam into Hyper Mode, he can concentrate the energy of God Finger into the ultimate technique, the Sekiha Tenkyoken.

The ASMD (Unreal series) can fire energy balls that are much more powerful than its energy beams once fired.

Crimson Witch (Scooby-Doo! and Kiss: Rock and Roll Mystery)
Add a photo to this gallery
Retrieved from "https://powerlisting.fandom.com/wiki/Energy_Ball_Projection?oldid=1719353"
Community content is available under CC-BY-SA unless otherwise noted.