The ability to release energy on a specific target area. Sub-power of Energy Attacks. Variation of Blast Attacks and Elemental Blast.

...both can fire off a more focused and destructive beam of energy at one another.

Whampire (Ben 10 Omniverse) clearing a large area of enemies with a powerful explosion of energy.

Frieza (Dragon Ball Z) preparing to destroy Planet Vegeta with a blast with enough power to destroy a dwarf star. 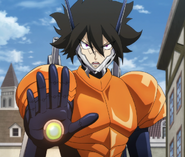 Wall Eehto (Fairy Tail) preparing to fire an blast equivalent to the Etherion Blast which can wipe out an entire nation.

Neinhart (Fairy Tail) can cause an explosion that can knock out Jellal at full strength, sending him to the bottom of the sea.

Seliah (Fairy Tail) is able to create energy blasts powerful enough to cause major damage in her Etherious Form.

Boros (One-Punch Man) can use the latent energy that his body produces to fire destructive energy blasts from the eye in his chest.

Shadow (Sonic the Hedgehog series) can gather negative Chaos Energy into his body and release it in the form of Chaos Blast.

Crimson Witch (Scooby-Doo and Kiss rock and roll mystery)
Add a photo to this gallery
Retrieved from "https://powerlisting.fandom.com/wiki/Energy_Blast?oldid=1313023"
Community content is available under CC-BY-SA unless otherwise noted.