The user can create and project bolts of energy and control the intensity/power of their projectiles, the bolts aren't weak but they aren't as powerful as a full powered attack. These bolts could be used to stun, burn, injure, or even to possibly penetrate/stab the enemy.

Strider’s (Hλlf-Life 2 series) can shoot out bolts of energy.

Whenever Jak (Jak and Daxter series) is empowered with Yellow eco, he can fire Yellow eco projectiles that are powerful enough to kill Lurkers and destroy armored boxes with one shot. 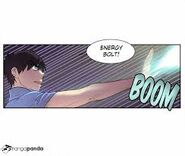 Shadow the Hedgehog (Sonic the Hedgehog), can manipulate Chaos energy and project it in the form of his Chaos Spears. 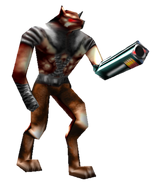 A Catman's (In the Flesh/Serious Sam) robotic gun replacement can fire energy bolts, though they tend to move rather slowly.

Cyborgs (Serious Sam) fire energy bolts via the usage of their robotic artillery that replaces the lower part of their left arm.