Create bows and arrows out of energy.

The ability to generate bows and arrows of pure energy. Variation of Energy Weaponry and Bow Construction.

The user can construct bows (including crossbows) and arrows from nothing or by shaping the existing energy allowing them to attack from distance. Depending on what the weapon is made of, it can possess a variety of abilities and be very effective in both offensive and defensive combat.

The Proto-Tool (Ben 10) is a multi functioned tool/weapon that Rook Blonko wields. One of it's function is a Custom Bow mode which fires energy arrows.

Yue (Cardcaptor Sakura) generating bow and arrow to fire at a target. 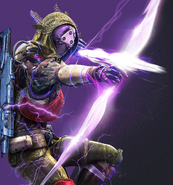 Hank, the Ranger (Dungeons & Dragons) pointing his bow to the enemy.

Herrscher of the Void (Honkai Impact 3rd) creating and firing an energy arrow.

Sasuke's Susanoo (Naruto) creates a crossbow and arrow out of chakra.

Yukari Takeba (Persona 4 Arena Ultimax) with her bow and arrow.

Allura (Voltron Force) has an energy bow and arrow as one of her two Voltcom weapons.