Use energy to cut objects.
The ability to use energy to slice objects. Sub-power to Energy Attacks. Variation of Elemental Cutting.

The user can project energy in a way that allows them to cut through matter from a distance. Although this attack does usually slashing damage, some users are able to focus it on a single piercing stab like an immaterial bullet.

... and Getsuga Jūjishō out of spiritual energy. 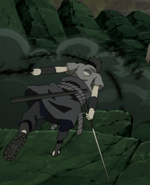 ...and later uses the Inferno Style: Flame Control Jutsu to create a sword of black flames and project a wave of cutting fire.

Ameyuri Ringo (Naruto) wielding Lightning Blades the Fangs: Kiba, which are imbued with electricity, utilizing the high-frequency vibrations to form the sharpest swords amongst the seven.

Raizen (Yu Yu Hakusho) flicking his finger to create an energy cutter on his descendent, Yusuke.

Hiei (Yu Yu Hakusho) infuses his broken sword with the Dragon of the Darkness Flame.

The blades the Flat Sisters (Marchen Awakens Romance) create with their Ghost ÄRM, Scalpel is capable of firing energy blades.

When Pause's Ghost ÄRM, Verfile lands on the required side, General (Marchen Awakens Romance) can turn his hand into a harpoon that fires energy blades.

The Celestial Spirit King's (Fairy Tail) Meteor Blade.
Add a photo to this gallery
Retrieved from "https://powerlisting.fandom.com/wiki/Energy_Cutting?oldid=1572410"
Community content is available under CC-BY-SA unless otherwise noted.