Mendoza (Garo) can create arms from energy to hit his enemies.

The user has or can form limbs out of energy to any size or any shape.

Upon drinking the blood of Pip Bernadotte and becoming a full vampire, Seras Victoria (Hellsing) replaced the left arm that she lost to Zorin Blitz with an arm made of powerful shadow energy. 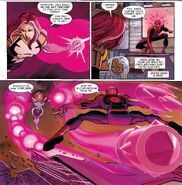 Qilby (Wakfu) can create an arm made of Wakfu energy
Add a photo to this gallery
Retrieved from "https://powerlisting.fandom.com/wiki/Energy_Limb_Generation?oldid=1469245"
Community content is available under CC-BY-SA unless otherwise noted.