Being a God of Destruction, Beerus (Dragon Ball Super) is able to completely neutralize any energy attack.

"Light is the proof of the emission of energy. This space, were light has been sealed, is cancelling it."
― Belldandy (Ah! My Goddess)

The power to negate energy. Sub-power of Energy Manipulation. Variation of Elemental Negation and Power Negation.

The user can negate energy and any energy-using attacks, ignoring their effects. 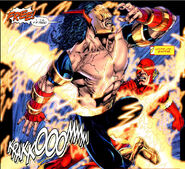 Wundarr/Aquarian (Marvel Comics)
Add a photo to this gallery
Retrieved from "https://powerlisting.fandom.com/wiki/Energy_Negation?oldid=1495632"
Community content is available under CC-BY-SA unless otherwise noted.