Kyle Rayner (DC Comics) up against an arsenal with his energy constructed sword.

The power to create weapons from energy. Sub-power of Energy Constructs. Variation of Elemental Weaponry and Weapon Creation. Not to be confused with Energized Weaponry.

User can create energy weapons from nothing or by shaping the existing energy, they are capable of creating virtually any weapon and how many they wish. Depending on the energy weapon is made of, it can posses a variety of abilities and be very effective in both offensive and defensive combat. 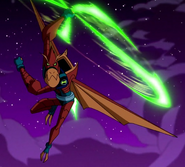 Guardians of The Universe (DC Comics)

Kinshiki Ōtsutsuki (Naruto) can use the Tools Creation at Will to create chakra weapons that are powerful enough to go against Sasuke's attacks.

Lucario (Pokémon) can use Bone Rush to create bones from energy.

Yugo (Wakfu) can create a sword and shield from Wakfu energies.

Megumi Aino/Cure Lovely (Happiness Charge Pretty Cure!) can create weapons such as bats and swords made of pure energy with the power of love.

Mana Inagawa (Valkyrie Drive: Bhikkhuni) using Ara Mitama to fire an energy arrow made from her hair.
Add a photo to this gallery
Retrieved from "https://powerlisting.fandom.com/wiki/Energy_Weaponry?oldid=1688581"
Community content is available under CC-BY-SA unless otherwise noted.