Tenya (My Hero Academia)'s Quirk manifests as engine-like protrusions on his calves.

The power to generate engine-like protrusions from one's own body. Variation of Natural Weaponry and Technology Imitation.

The user has or can generate engine-like protrusions somewhere on their bodies that allow them to move at extraordinary speeds. 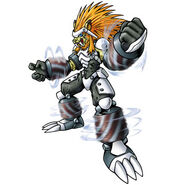 Tenya (My Hero Academia) performing a engine boost with his engines.

Metal Sonic (Sonic the Hedgehog) possesses a powerful jet booster that allows him to fly and move at speeds rivaling Sonic's.
Add a photo to this gallery
Retrieved from "https://powerlisting.fandom.com/wiki/Engine_Protrusion?oldid=1413808"
Community content is available under CC-BY-SA unless otherwise noted.