Chelsea (Akame Ga Kill!) is a very seasoned assassin, using her "Gaea Foundation" to transform herself, and then swiftly stabbing her unsuspecting target in a vital spot.

As the Commander-in-Chief of the Onmitsukidō, Suì-Fēng is one of the foremost masters in the art of assassination.

Both Urahara Kisuke and Shihōin Yoruichi were formerly in the Onmitsukidō, and are masterful assassins.

Nico Robin claimed to be an assassin before joining the Straw Hats.

Rob Lucci is the strongest of the CP9, World Government's secret assassin squad, even at the tender age of 13.

Jabra is the third strongest assassin of CP9, though he messed up that he was required to kill more than he originally had to. 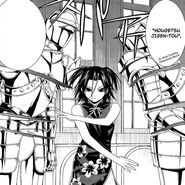 Shuzen Akua is the assassin of the Fairy Tales, and formerly of the Miao Family.

Akame is a deadly assassin with her skills and equally deadly Muramasa sword.

Kurome is a deadly assassin, with drugs and experiments inserted into her body and her dead-controlling sword, Yatsufusa.

Nobume Imai (Gintama) is a master swordswoman and the commander of the Mimawarigumi's assassination unit.

Mukuro, later Nobume Imai (Gintama) has been trained by Tenshoin Naraku to be an assassin even as a child, and her skills is such that she is one of the Three Wings of Naraku, and often called the "Bastard Child of the Death God".

Oboro (Gintama) the leader of the Tenshoin Naraku, considered to be the strongest assassin within group, with his mastery of Hakkei and acupuncture needles to back up his reputation.

Haruto is a very powerful assassin even before acquiring his powers, having a success rate of 99.9%.

Hatake Kakashi was once an assassin, working as an ANBU, and was very famous.

Momochi Zabuza was one of the most infamous assassins of the Kirigakure village, as his Silent Killing, especially combined with Hiding in the Mist technique, is second to none.

Hoshigaki Kisame was an assassin of the Kirigakure, and would kill even his own comrades to protect what he deems important.
Aaaaasainaruto.png
Sai was an assassin for the Root organization, going as far as to eliminate emotions, and was said to be the strongest of his generation.

Mercenary Tao is such as skilled assassin that he can kill people using only his tongue.

Killua Zolodyck can use techniques to assassinate. 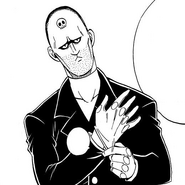 Jacob Lessio (Fairy Tail) is a genuine master of Magical Assassination, he is also one of the Spriggan 12 which makes him all the more dangerous.
Add a photo to this gallery

Before and after Al Simmons became Spawn (Image Comics), he was an expert in assassination.
Add a photo to this gallery

The Spy (Team Fortress2)
Add a photo to this gallery

Wesley Gibson
Add a photo to this gallery
Retrieved from "https://powerlisting.fandom.com/wiki/Enhanced_Assassination?oldid=846624"
Community content is available under CC-BY-SA unless otherwise noted.