"Coach Bowles said it was the best workout he's ever seen. World-class speed. I watched it, too. You could blow through an offensive line like wind through a pile of leaves..."
― Chase Brunski (Luke Cage) 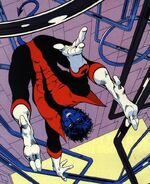 Jason Todd/Red Hood (DC Comics)
Add a photo to this gallery
Retrieved from "https://powerlisting.fandom.com/wiki/Enhanced_Athleticism?oldid=1589403"
Community content is available under CC-BY-SA unless otherwise noted.