The power to turn any part of the body 360 degrees.

User can turn any part of their body 360 degrees or more, including shoulders, hips, elbows, knees, torso, neck, etc. This allows to, say, make it so that the user's body parts are facing backwards, or even sideways.

Shakkoumon (Digimon) can rotate its neck and torso 360 degrees. 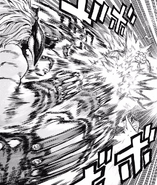 Alexandrite (Steven Universe)
Add a photo to this gallery
Retrieved from "https://powerlisting.fandom.com/wiki/Enhanced_Body_Part_Rotation?oldid=1324389"
Community content is available under CC-BY-SA unless otherwise noted.