Inhale or exhale with extreme force.

The ability to exhale/inhale with superhuman power. Sub-power of Breath Manipulation. Variation of Breath Powers.

Gustavus (The Adventures of Baron Munchausen)

Vortex (Danny Phantom) blowing Vlad away by blowing wind from his mouth.

Majin Buu (Dragon Ball Z) blowing into a scrunched up handcuffs, sending it flying hard into the police chief's face.

As the son of the North Wind, Bigby Wolf (Fables), the legendary Big Bad Wolf, is capable of unleashing gale-force breath when in his true giant wolf form.

Gale Force (The Thundermans) is a Human Wind Tunnel, with her superpower is blowing a mighty wind, which she used to destroy an entire city by causing a corn tornado, or as she calls it, "cornado!"

Spark (Mighty Med) can blow things at a strong gust of wind from her mouth.

Clark Kent (Smallville) clears a field with his super-breath. 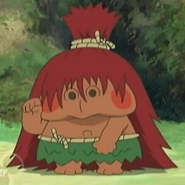