Shen (Kung Fu Panda) created many powerful cannons that he used to devastate the concept of Kung-Fu.

Use cannons with extreme skill.

"A weapon - one that breathes fire and spits metal!"
― Shifu (Kung Fu Panda)

The ability to be highly proficient in handling a cannon. Variation of Artillery Proficiency and Enhanced Accuracy.

Users are highly skilled with all types of cannons, allowing them to perform great feats and benefit in far ranged combat. Users are to have excellent bull-eyes aim on their target via ammunition.

Users are also able to operate all variations of cannons. They can create cannons as well as repair them. Also to have expert knowledge of cannons and handling them. Users have excellent intuition on trigger-initiated, hand-held, and hand-directed implements, especially with an extending bore, which thereby resembles the class of weapon in either form or concept.

Urzael (Diablo) possesses a powerful cannon that he can use for both artillery and a battering club.

Renkotsu (InuYasha) was very skilled with his hand cannon.

Baby 5 (One Piece) changing her hands into a hand cannons that she can wield with great proficiency.

Kujiranami Hyōgo (Rurouni Kenshin) armed his missing right hand with an Armstrong Cannon, which he was able to shoot down even a faraway target.

Wall Eehto (Fairy Tail) creating his Super Long Distance Anti-Material Magic Cannon which has a range of 400 km that reach from port town of Hargeon to Magnolia. 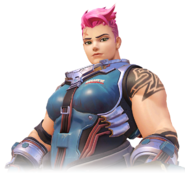 Zarya (Overwatch) with her massive strength can wield a mighty Particle Cannon.

Through his control of the Weapon ÄRM, Napalm Death, Halloween (Marchen Awakens Romance) can generate a cannon and shoot concentrated blasts of fire. 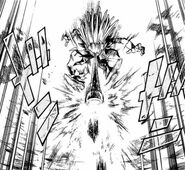 By lying, Pinocchion (Marchen Awakens Romance) can grow his nose into a cannon.

Ryu (Ninja Gaiden) has excellent marksmanship with the Howling Cannon, an enormous matchlock rifle with the size and firepower of a cannon.
Add a photo to this gallery
Retrieved from "https://powerlisting.fandom.com/wiki/Enhanced_Cannon_Skill?oldid=1502601"
Community content is available under CC-BY-SA unless otherwise noted.