Hajime Nagumo (Arifureta Sekai Saikyou) possess tremendous resolve and determination, that allow him to defy even the evil god Ehit.

"I'm going to become even stronger. I might only be a commander of 300 comrades at the moment but from here on, I'm gonna climb even higher and my unit's gonna grow even larger too. The names of me and my unit will roar throughout all the lands under the heavens. So listen well, Ri Boku. And etch my face and my words deeply into your head. The one who will defeat you will be I, Shin of the Hi Shin Unit!!"
― Ri Shin to Ri Boku (Kingdom)

" I will... not lose! Even if my opponent is a god, I will defeat anyone who stands in my way! Do you hear me? My name is Ryuga! I reign over this world as the strongest, the Dragon Emperor himself!"
― Ryuga (Beyblade)

"Are you just going to let me pierce your heart? Why aren't you withdrawing?"
"I don't know...I don't know why, but....if I withdraw even a step, I feel like those various important things such as pledges and promises in the past will be shattered, and I won't be able to come back to where I am now..."
"Yes, that's what defeat is about."
"Then, all the more reason I can't withdraw..."
"Even if you die?"
"I'd rather die!"
― Roronoa Zoro and Dracule Mihawk (One Piece)

"You're free to choose whichever path you want. But make sure you're fully committed to whatever decision you make."
― Hajime Nagumo (Arifureta Sekai Saikyou)

The ability to possess enhanced determination. Not to be confused with Enhanced Willpower.

The user is fiercely self-driven and resolute and can focus earnestly on whatever task they have at hand without ever getting distracted by whatever is going on around them nor dissuaded/discouraged/deterred by whoever tries to stop them from accomplishing what they so desire. They are unfazed by the effects of fear, stress, exhaustion, and pain in pursuit of their goals and can even ignore their own bodily necessities like drinking, eating, urinating, defecating, and sleeping if it means not giving upon them. The user also has the very guts and instinct to never give up on said goals no matter what comes their way and overflow with faith, hope, confidence, dedication, and persistence, allowing them to easily endeavor in a great many things that most would consider risky, dangerous, crazy, insane, and so on. 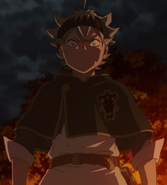 Chasing a dream that many would call fruitless or impossible, Ri Shin (Kingdom) is completely determined in his pursuit of becoming the Greatest General underneath the Heavens...

..., enabling him to run headfirst into any or all kinds of danger without any sort of hesitation.

...He is one that anyone can depend on in a pinch, as he will be the first to dive into battle no matter the odds...

...even when he is in the form of a small rabbit that he takes on when he no longer has children's' belief, he is willing to jump headfirst into battle and fight to his best ability.
Add a photo to this gallery

Regular Show - Rigby vs. Muscle Man
NEVER QUIT.
Add a photo to this gallery
Retrieved from "https://powerlisting.fandom.com/wiki/Enhanced_Determination?oldid=1655079"
Community content is available under CC-BY-SA unless otherwise noted.