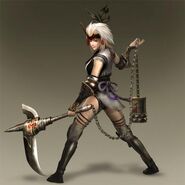 ...in wielding nunchaku, easily blowing away entire groups of opponets with each swing.
Add a photo to this gallery
Retrieved from "https://powerlisting.fandom.com/wiki/Enhanced_Flailmanship?oldid=1330794"
Community content is available under CC-BY-SA unless otherwise noted.