User is able to bend and twist their body beyond the normal limits of physiology, although still only from the joints. Their hypermobile joints, muscles, tendons and physiology in general allow the user perform near-boneless looking contortions without stress or damage and stay in any position they choose as long they need without effort or strain.

Hashibira Inosuke (Kimetsu no Yaiba) showing off his incredible flexability.

Cavern Crashers (Dreamworks Dragons) are gecko-like dragons that are capable of collapsing their skeletons, allowing them to slink through cracks and crevices in caves. 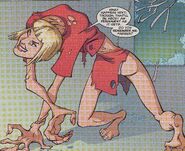 Killua Zoldyck (Hunter X Hunter)
Add a photo to this gallery
Retrieved from "https://powerlisting.fandom.com/wiki/Enhanced_Flexibility?oldid=1406120"
Community content is available under CC-BY-SA unless otherwise noted.