Hawk Girl (Justice League/DC Comics) is a force to be reckoned with when armed with her signature mace.

"What a monster...SMASH!!"
― Koro on Zen Ou of the Kan Ki Army before getting killed (Kingdom)

Users are able to demonstrate brutal aptitude and great proficiency in using maces to inflict heavy blunt force damage and/or trauma, making the user very dangerous in close quarters combat. The user can also break down structures and take out heavily armored enemies. 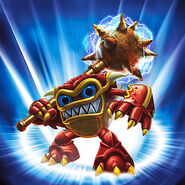 Gin of the Kreig Pirates (One Piece)

Mou Bu, a Great General of the State of Qin (Kingdom)

Rin Bu Kun, a General of the Super State of Chu (Kingdom)

Zen Ou of the Kan Ki Army (Kingdom) wielding his war mace with powerful proficiency.
Add a photo to this gallery
Retrieved from "https://powerlisting.fandom.com/wiki/Enhanced_Macemanship?oldid=1446091"
Community content is available under CC-BY-SA unless otherwise noted.