The ability to achieve complete and utter precision on close targets. Sub-power of Enhanced Combat. Not to be confused with Enhanced Accuracy.

User can achieve complete and utter precision on close targets, with the activity in their brain center for precision drastically improved. The user can slice, cut, stab, and so on flawlessly and at the most opportune moments in all the targeted areas of their target.

Unlike Enhanced Accuracy which deals with shooting one's targets from a distance with ranged weapons like guns and bows, Enhanced Precision deals more with hitting targets that are at close range with melee weapons like swords, knives, claws, scythes, etc. 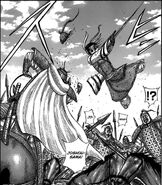 ...displays her versatility as she kills Joshou of the Dojaku with deadly precision.

..., counterattacking a tag-team attack from Ri Shin and Ou Hon as he targeted their valuable spots...

Mou Ten (Kingdom) emphasizes versatility and precision in his swordsmanship...

...the vital areas of his opponents with high-speed thrusts.

...as she cripples Bunen with deadly precision.

...able to shoot with extraordinary precision.

Jin Sakai (Ghost of Tsushima) developed such a formidable level of swordsmanship. That he could cut down many, in one fell strike alone.
Add a photo to this gallery
Retrieved from "https://powerlisting.fandom.com/wiki/Enhanced_Precision?oldid=1551513"
Community content is available under CC-BY-SA unless otherwise noted.