Bruce Wayne/Batman (DC Comics), is known for being prepared for all types of emergencies.

Be prepared for most if not all emergencies.

"You always carry kryptonite around with you?"
"Call it insurance.
"And they say I'm scary."
― Hawkgirl and Bruce Wayne/Batman (DCAU)

"And yet, that was all fun and games for Bege, he had an iron-clad fortress awaiting them and send them packing with their tails between their legs, laughing all the while."
― Jinbe (One Piece)

"There's No Such thing as Paranoia, the real situation is always much worse than you imagine."
― Hunter S. Thompson

"If I prepare a thousand options, all I need is for one of them to work. So I make a habit of preparing anything and everything that shows any kind of promise. That's just how I work."
― Kisuke Urahara (Bleach)

"I expect the worst, so I prepare for the worst, when the worst happens, I'm ready."
― John Constantine (DC Comics)

The power to be prepared for virtually all situations, no matter how unusual.

The user possesses the ability to be aware of how to prevent certain possibilities or scenarios that other people would not consider. This is useful in defeating enemies since the user would be aware of the enemy's powers or abilities.

Kisuke Urahara (Bleach) admits to preparing "a thousand options" for everything and anything he might encounter. 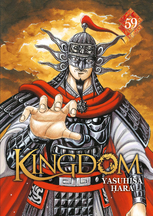 Ou Sen (Kingdom)
Add a photo to this gallery

Tony Stark (Marvel Comics) has an Iron Man suit for pretty much any situation.

Fred Jones (Scooby-Doo)
Add a photo to this gallery

Bobby Singer (Supernatural)
Add a photo to this gallery
Retrieved from "https://powerlisting.fandom.com/wiki/Enhanced_Preparedness?oldid=1523795"
Community content is available under CC-BY-SA unless otherwise noted.