Grell Sutcliffe (Black Butler) is a Shinigami who modified their Death Scythe to the form of a chainsaw. DEATH~!

"What, you never saw a guy with a chainsaw hand before?"
― Ash Williams to Amanda Fisher (Ash Vs.Evil Dead)

The ability to wield chainsaws or other sawed weaponry with great ease and skill. Variation of Weapon Proficiency.

Users possess dangerous aptitude for the way of sawed weaponry, they demonstrate great proficiency in power, speed and sheer savagery allowing them to perform feats such as decapitate their opponents, saw off their opponent's weapons and cut through stone, concrete, and brick with ease.

The Sadist (The Evil Within) 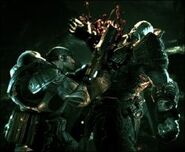 Marcus Fenix (Gears of Wars) demonstrates the potency of the Mark 2 Lancer. 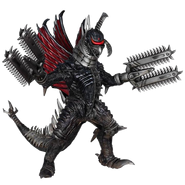 Gigan (Godzilla franchise) has a chainsaw torso and dual-chainsaw hands.

Kanaya Maryam (Homestuck) saws another character, Eridan, in half with her chainsaw.

Haruna (Kore Wa Zombie Desu Ka) is skilled at fighting with a Chainsaw.

Being from a family of Zombie Hunters, Juliet (Lollipop Chainsaw) is quite skilled "rekilling" the undead.

Makoto Shishio (Rurouni Kenshin) is a master swordsman, combining his skills with his serrated Mugenjin to create flaming attacks.

Giriko (Soul Eater) is a demon weapon who's weapon form is a chainsaw, being able to use said power with skill and deadly force.

Gamma Akutabi (Zombiepowder.) using a chainsaw sword alongside with his Karinzanjutsu.
Add a photo to this gallery
Retrieved from "https://powerlisting.fandom.com/wiki/Enhanced_Sawmanship?oldid=1390839"
Community content is available under CC-BY-SA unless otherwise noted.