Grell Sutcliffe (Black Butler) is a Death God who modified his Death Scythe to the form of a chainsaw. DEATH~!

Users possess dangerous aptitude for the way of sawed weaponry, they demonstrate great proficiency in power, speed and sheer savagery allowing them to perform feats such as decapitate their opponents, saw off their opponents weapons and cut through stone, concrete and brick with ease. 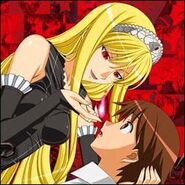 Being from a family of Zombie Hunters, Juliet (Lollipop Chainsaw) is quite skilled "rekilling" the undead.
Add a photo to this gallery
Retrieved from "https://powerlisting.fandom.com/wiki/Enhanced_Sawmanship?oldid=262090"
Community content is available under CC-BY-SA unless otherwise noted.