Rosalie Cullen (Twilight) was a greatly seductively beautiful even as a human in her modeling days that many men desired her, but in her vampiric conversion her sexual attractiveness was greatly enhanced.

"Whoa! How sexy! To be honest, I'd be happy to have a secretary like her. Hey! What am I, middle-aged guy?1"
― Nami on Kalifa (One Piece)

The power to have an extremely attractive sex appeal. Sub-power of Indomitable Sexuality. Physical counterpart of Seductive Magnetism. Variation of Enhanced Beauty.

Users possess a particularly high level of sex-appeal that far surpasses human standards. Many factors are usually involved, but they are mostly defined by an extremely lust-inducing physique with heightened sexual features, and an intutive mastery of the associated body language, expertly sending all the right signals of a most desirable partner.

Users may or may not have the libido and sexual talents to match, or even any at all, but the breathtaking primal desire they inspire in all around them remains nigh-irrepressible, granting them major leverage in any social situation and allowing them to wrap most anyone around their little finger in a matter of moments.

This sexual dominance still operates on a natural level however, and while the influence granted by their unearthly features is substantial, it remains relative and limited, and cannot compel others into actions that are clearly insane.

They do multiply the effectiveness of any persuasive talent they may otherwhise possess though, and this combination may allow users to reach a nigh-supernatural level of social influence, and easily forge a fanatical level of trust and devotion in whoever they exert these talents on.

Rangiku Matsumoto (Bleach) is considered one of the most sexiest Shinigami there is, and certainly knows how to use her appeal to her advantage.

As the Demon Lord of Lust, Lilithmon's (Digimon) bewitching sexuality allows her to tempt many beings into commiting vices.

Diarmuid Ua Duibhne's (Fate/stay night) is regarded as a remarkably handsome man, his features are capable of attracting a woman's heart with a glance.

The Priestess of Thunder and Light, Akeno Himejima (Highschool DxD) is particularly seductive even for a Fallen Angel.

The Pirate Empress, Boa Hancock (One Piece) is said to be the most beautiful woman in the entire world, inducing indomitable lust in almost everyone who gazes upon her.

Nami (One Piece) is an exceptionally attractive young woman... 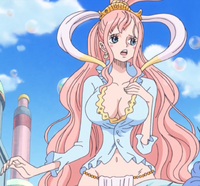 Princess Shirahoshi (One Piece) is exceptionally beautiful even among the mermaids and is said to surpass even Boa Hancock.

Oriana Thomson (To Aru Majutsu No Index) uses this power together with her hand-to-hand combat prowess.

Shiori Tsuzuki (Witchblade anime) similarly gains much more mature and desirable features in her Cloneblade Form.
Add a photo to this gallery

Holli Would (Cool World)
Add a photo to this gallery 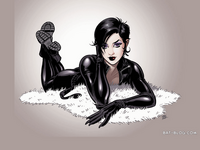 Catwoman/Selina Kyle (DC Comics) has always had a seductive side especially when she uses her beauty.

By her own admission, Power Girl (DC Comics) does not need to wear a mask, as her distracting breasts make sure nobody ever looks at her face anyway.

Black Cat (Marvel Comics) is seductive with her beauty.

Vampirella (Vampirella)
Add a photo to this gallery

Aphrodite/Venus (Greco-Roman Mythology) is the goddess of love and sexuality and beauty. 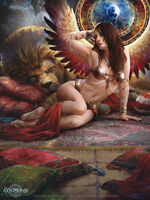 Inanna/Ishtar (Sumerian Mythology) has always used her beauty to seduce all she desires.
Add a photo to this gallery

Vampires (Twilight)
Add a photo to this gallery 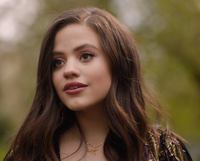 Maggie Vera (Charmed 2018) like many witches have such a keen beauty that makes her desirable by many men. 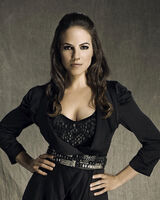 Bo Dennis (Lost Girl) as a succubus, she inherited seductive beauty that makes her desirable by many be they men or women fae or humans.

Saxa (Spartacus) is desirably beautiful and has been lust over by many men and women.
Add a photo to this gallery

Laura and Massimo (365 Days) both have alluring and sexual attractiveness that they intensively desire each other greatly.

Jake Taylor (Cursed 2005 film) as a werewolf with has a high levels of sexual allure and has had many sexual partner because of his handsomeness.

Eva (Lesbian Vampire Killers) was sired Carmilla as her lover.

All Vampires (Lesbian Vampire Killers) have a supernatural level of attractive power.
Add a photo to this gallery

In her attempts to seduce Michael Becket she grew obsessively infatuated with, Alma WADE (F.E.A.R. Series) evolved her form into the beautiful young woman she would have normally become. 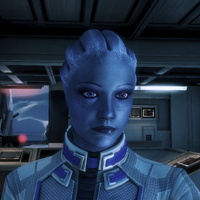 The Asari race (Mass Effect) is sexually desired by almost any species in the galaxy... and even beyond.

Ivy Valentine (Soul Calibur) is as lust-inspiring as she is mortally dangerous.

Cerene (Bloodlust Cerene) is hated and desired in equal measure for obvious reasons. 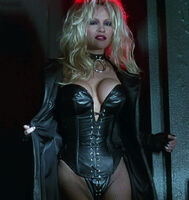 Barb Wire (Dark House Comics)
Add a photo to this gallery
Retrieved from "https://powerlisting.fandom.com/wiki/Enhanced_Sex_Appeal?oldid=1630212"
Community content is available under CC-BY-SA unless otherwise noted.