Perceive multiple sensory/cognitive responses at once

"Now, hold it a little bit more firmly. That's it. Perfect. Now think. No, think's not right. Feel the notes inside your head."
"It did exactly what I thought. I mean, felt."
"Yes, it's a direct expression of the music within. Now we just have to teach you to structure that feeling. Try it again."
― Melian and Katie (Star Trek: TNG)

The power to perceive multiple different sensory or cognitive responses at once. Sub-power of Enhanced Senses.

The user has either ability to trigger a constant synesthesia, a neurological phenomenon in which stimulation of one sensory or cognitive pathway leads to automatic, involuntary experiences in a second sensory or cognitive pathway. In other words, such as being able to "smell" colors, "see" odors or perceive sound-waves as colorful lights. This can lead to being able to sense the emotions of others, among other feats. 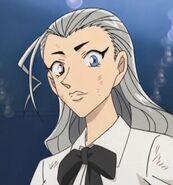 Curaçao (Detective Conan) has color-grapheme synesthesia, which allows her to associate a color to a concept she must remember such as the names of spies.

Rachel Pirzad (Alphas) can perceive many scents as colors.

Oh Cho-rim (A Girl Who Sees Smells) can see smells in patterns.

Wolfwalkers (Wolfwalkers)
Add a photo to this gallery
Retrieved from "https://powerlisting.fandom.com/wiki/Enhanced_Synesthesia?oldid=1761973"
Community content is available under CC-BY-SA unless otherwise noted.