Sly Cooper (Sly Cooper series) was born into a long family of thieves as the next in line to live up to the Cooper name, and has become a world renowned thief like his ancestors before him.

Catwoman (DC Comics) is considered one of the greatest, if not, the best, non-super-powered thief of DC Comics.

Having stolen from deadly pirates since childhood, Nami (One Piece) is the resident expert thief of the Straw Hat Pirates.

Genma Saotome (Ranma 1/2), despite his size, quite a skilled thief, creating two martial arts techniques based on it. One of which, which can mask his presence. 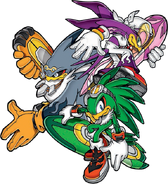 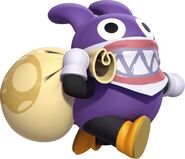 Experiments 149 "Bonnie" and 150 "Clyde" (Lilo & Stitch) are programmed to be expert thieves, composed of brains(Bonnie) and brawn(Clyde). 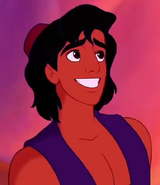 Aladdin (Disney's Aladdin), being a homeless orphan since he was seven, grew up stealing to survive, to the point that most don't realize he's stolen from them until it's too late.

Parker (Leverage) is a skilled thief with a number of impressive accomplishments to her name. Including stealing the following: The Hope Diamond, The Polar Star Diamond, the Gem of Gibraltar, performed a heist in the Louvre.

Lupinrangers (Kaitou Sentai Lupinrangers VS Keisatsu Sentai Patrangers)
Add a photo to this gallery
Retrieved from "https://powerlisting.fandom.com/wiki/Enhanced_Thievery?oldid=1543743"
Community content is available under CC-BY-SA unless otherwise noted.