The users possess enhanced skills to throwing any sort of objects, from weapons to improvised objects, at above normal level force and speed.

When in his Titan form, Zeke (Attack on Titan) can hurl large rocks at Mach speed.

Danjō Kōga (Basilisk) throwing his needles with such force they easily pierce through armor and flesh.

With his stealthy speed, Constantine Drakon (DC Comics) can throw a knife into a person's shoulder so fast, a room full of people focused on him did not see him perform the deed.

Vegeta (Dragon Ball Z) throwing Nappa high into the sky to prepare for his Galaxy Breaker.

Chi-Chi (Dragon Ball Z) throws Mr. Shu quite a far distance out of her house after he insults her family. 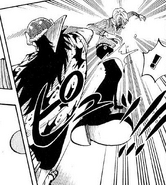 With his superhuman strength, Monkey D. Garp (One Piece) can throw cannonballs as if they were baseballs.

As a Fishman, Vander Decken IX (One Piece) can throw large weapons with superhuman strength.

Orlumbus (One Piece) using his Admiral Killer Bowling in which he effortlessly throws a person from a very far distance.

With his powerful strength, Charlotte Katakuri (One Piece) can throw jellybeans with deadly velocity.

Saitama (One-Punch Man) throwing a pebble at Geryuganshoop, defeating him.

Bakugo (My Hero Academia) uses his Quirk to enhance his throwing ability to explosive levels.

Sakamaki Izayoi (Problem Children are Coming from Another World, aren't they?) possesses supernatural strength, allowing him to turn ordinary rocks into high-impact projectiles by simply throwing them.

...threw a spear so blindingly fast...

...that it pierced clean through 4 grown man.
Add a photo to this gallery
Retrieved from "https://powerlisting.fandom.com/wiki/Enhanced_Throwing?oldid=1430873"
Community content is available under CC-BY-SA unless otherwise noted.