Sunny (Toriko) one of the "Four Heavenly Kings"

The power of enhanced sense of touch. Sub-power of Enhanced Senses.

User has exceptionally good sense of touch, allowing them detect specific persons, objects, substances or even places, locate their origin and track with nothing but the tip of their fingers. Some may even be able to detect the thinnest crack on anything that is invisible to the naked eye.

Users may be able to sense vibrations through solid substances, liquids or even the air-pressure changes.

Spider-Man (The Amazing Spider-Man) using his webs as a vibration sensor to track down the Vermin.

Due to his blindness, Matt Murdock/Daredevil (Marvel Comics) possesses stronger senses than most, having a stronger sense of touch. 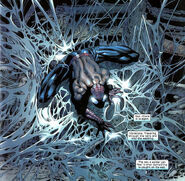 After becoming the host to the Other, Spider-Man (Marvel Comics) developed an enhanced sense of touch, able to sense vibrations using his webbing.
Add a photo to this gallery
Retrieved from "https://powerlisting.fandom.com/wiki/Enhanced_Touch?oldid=1329527"
Community content is available under CC-BY-SA unless otherwise noted.