Enigma force is a sentient energy field that seeks out and bonds with an agent or agents. Variation of Power Infusion. Not to be confused with Power Symbiosis.

Enigma Forces manipulate a particular being to their own desires. It is essentially a sentient power and living energy that chooses a host, maybe an energy or a being which controls another energy or being.

Attributed powers and singled-out power levels vary from chosen partner and appear to be ambient, presumably adapting to meet the demands of an area's point of devastation and the peril oneself is faced with. However, some Enigma Forces have preset abilities that do not depend on the host. Some Enigma Forces become in-tune with the partner and drastically enhances the individual host's powers and abilities if they are present; the host themselves may already have reached massive levels of force and energy without the Enigma Force, which only serves to enhance their capabilities even further. Other Enigma forces provide an appropriate set of powers to every host, though the magnitude of the powers may or may not vary.

Some Enigma Forces only target people without powers, some only target those with powers, and some only target those it chooses as necessary or deems worthy, or give them powers to teach them a lesson. Enigma Forces may bond till the current host dies, the crisis passes, or it decides that the host is unworthy or that it is needed more elsewhere. As it is usually up to the Enigma Force itself to choose a host this is most definitely a superpower that can strike anyone out of nowhere with no obvious catalyst beyond the power itself.

The Negative/Speed Force (DC Comics) is an energy field that grants all speedsters their power.

The Sage Force (DC Comics) is an energy field that radically enhances the minds of its conduits as well as granting them psychic powers such as telepathy and telekinesis. 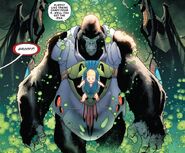 The Still Force (DC Comics) allows whoever taps into it to negate motion, baring the potential to induce and accelerate the force of entropy.

Captain Universe (Marvel Comics) is the persona taken on by hosts of the Uni-Power...

...Peter Parker/Spider-Man is just one of many hosts of the Uni-Power... 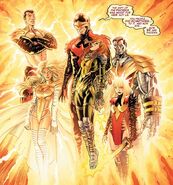 The Lost Galaxy Power Rangers (Power Rangers)
Add a photo to this gallery
Retrieved from "https://powerlisting.fandom.com/wiki/Enigma_Force?oldid=1502664"
Community content is available under CC-BY-SA unless otherwise noted.