Users of Animal Bond (Star Wars) could empathize and bond with an animal by using the Force.

Bond with other entities.

"Bonds of people is the true power."
― Persona 4: The Animation

The ability to bond with other entities. Sub-power of Entity Manipulation. Not to be confused with Entity Tethering. Related to Bond Manipulation.

User can bond with other entities; metaphysically knitting individuals together by various means, be they telepathic, empathic, symbiotic, or others, making the entities more connected to each other through their friendship, love, intimacy, kinship and more.

User can selectively choose to bond with any other entity regardless of what they are, be they spiritual beings, physical beings, extraterrestrial beings, mythical beings and so on to be able to truly understand with each-other and to better empathize with them and to better themselves.

All who share this bond with others would have a hyper connection to other entities potentially able to share, meld, empower and synchronize each other and oneself, spiritually, mentally and even physically be able to unlock abilities and enhance themselves in their time of need.

When users develop their bonds with a specific someone, they can reach higher levels of connections to the point of reaching an eternal bond. Making the bonds they have with people so powerful that not even death can break, making their bond everlasting.

Na’vi (Avatar) can bond with each other and/or any creature on Pandora using their queue and even instantly domesticate animals.

Members of the Ackerman clan (Attack on Titan) activate their power by forming a bond with someone to protect while facing death...

...in Mikasa's case, when Eren Yeager rescued her from human traffickers and ordered her to fight.

Hiro (Darling with the Franxx) was able to form a powerful bond with Zero Two, allowing Strelizia to evolve into Strelizia True Apus.

Robin (Fire Emblem Awakening) formed strong bonds with Chrom and the rest of his army, which not only allowed him to break free of Grima's control, but return to life after killing him and fading away.

Dragon Riders like Eragon (Inheritance Cycle) have a telepathic and empathic bond with their dragons like Saphira, making them capable of understanding one another.

Sora (Kingdom Hearts series) has bonded his heart with those of everyone he meets, gaining strength from their belief in him and overcoming nearly all obstacles from it.

Symbiotes (Marvel Comics) regularly bond with other entities for survival, allowing them to recall information from previous hosts...

...while attaching traces of themselves to said hosts' DNA.

... an ancient religion that was meant to teach everyone to connect with each other to better understand each other through Chakra, an ability Naruto used to connect and protect his fellow shinobi.

When Naruto Uzumaki (Naruto) bonded with the Nine-Tailed Fox, Kurama, he synchronized with the tailed beast's chakra in order to increase his power.

Naruto Uzumaki (Naruto) using Ninja Creed/Ninshū with all his friends.

Negi Springfield (Negima) is able to form a Pactio with other beings, allowing them to share magic power with him and vice versa, and granting him support in battle.

The male and female protagonists (Persona 3) were able to form Social Links with their friends, allowing them to grow stronger and evolve their Personas.

Yu Narukami (Persona 4) was able to form Social Links with his friends, allowing both himself and the Investigation Team to grow stronger and evolve their Personas.

Raven Branwen's (RWBY) Semblance, Kindred Link, allows her to create portals to those she has emotionally bonded with.

Sensates (Sense8) have and can create telepathic links, allowing them to always connect and bond with each other.

Emerl (Sonic Battle) can form a Link with beings that wield great power, in this case Sonic. 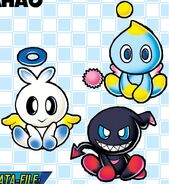 Chao (Sonic the Hedgehog series) can form bonds with other life forms, from animals to characters, allowing them to gain their characteristics and traits.

Some Shadowhunters (Shadowhunters) can form a Parabatai Bond with each other to have a better connection with each other in battle and socializing; this bond can empower their abilities to use their runes at a stronger level.
Add a photo to this gallery

Hagoromo Spread Ninshu All Over The World
Add a photo to this gallery
Retrieved from "https://powerlisting.fandom.com/wiki/Entity_Bonding?oldid=1460447"
Community content is available under CC-BY-SA unless otherwise noted.