Grand Zeno and Future Grand Zeno's (Dragon Ball Super) Erase ability allows them to erase anything they desire on any scale.

"Ah! Whats happening!"
"Don't look at her, don't look at her. It's okay, just go with it. It'll all be over in a second."
― Meg Griffin and Peter Griffin after God erases Meg from reality (Family Guy)

The user is able to erase things from existence. This means that the object is totally obliviated - there are no debris or leftovers from the erased target. It is completely removed from reality. Note that this power is not absolute in any way, and that there may be ways to undo this removal using appropriate powers. 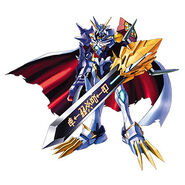 Omnimon X (Digimon) can delete enemies from existence with his All-Delete attack.

Okuyasu Nijimuru’s (JoJo's Bizarre Adventure Part IV Diamonds are Unbreakable) Stand, The Hand, erasing space with its right hand, and anything within it…

…including the air itself.

After transforming into the Demiurge, Billy Kaplan (Marvel Comics) was able to erase the extradimensional monster know as Mother from existence as easily as one would tear a piece of paper in half.
Add a photo to this gallery