Wonrei (Zatch Bell!) is able to shape his energy into a large white tiger with his Rao Diburen spell.

The power to create beings of pure energy or shape it into certain shapes. Sub-power of Energy Attacks and Energy Constructs. Variation of Elemental Entity Creation.

User is able to create beings of pure energy or shape existing energy into wanted shapes and purposes. They can grant the beings varying levels of independence (controlled, automatons/programmed, semi-independent) and existence (momentary to permanent) and delete the creature once they are done with them. 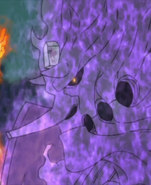 Indra Ōtsutsuki (Naruto) was one of the first to summon Susanoo, utilizing it at its highest leveled form. 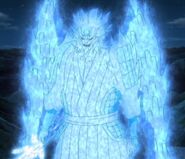 Hagoromo Ōtsutsuki (Naruto) was the first person in the world to summon Susanoo, utilizing it at its highest leveled form.

Madara Uchiha (Naruto) finalizing his Susanoo, transforming it into a guardian...

...of immense power that rivals the Tailed Beasts.

Sasuke Uchiha (Naruto) summoning his Susanoo in its first form,…

Kakashi Hatake (Naruto) gained both Mangekyō Sharingan from Obito's spirit, allowing him to summon Susanoo, in its highest form.

Shisui Uchiha (Naruto) summoning his Susanoo in its complete form, short of its finalization and stabilization.

Mistmane and Sable Spirit (My Little Pony: Friendship is Magic) 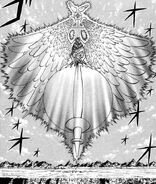