The user can generate, manipulate and/or absorb earth with supernatural properties, and are able to use it for various purposes, such as enhancing their physique, healing, teleportation, etc.

Deathwing (World of Warcraft), formerly known as Neltharion, was empowered by the titan Khaz'goroth with the esoteric power to control earthly domains and deep places of the world. 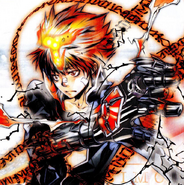 Jura Neekis (Fairy Tail) using his famed esoteric earth magic showcasing his power as one of the 10 Wizard Saints.

God Serena (Fairy Tail) as the strongest Wizard Saint possesses 8 different elemental Dragon Slayer Lacrima, one of them is the Cavernous Dragon Slayer Magic.
Add a photo to this gallery
Retrieved from "https://powerlisting.fandom.com/wiki/Esoteric_Earth_Manipulation?oldid=1656647"
Community content is available under CC-BY-SA unless otherwise noted.