Nahamah (Black Clover) can create and manipulate mystical demonic flames that can burn non-physical and conceptual objects, like magic and shadows.

The user can manipulate the esoteric side of the flames with supernatural properties and are able to use it for various purposes, such as enhancing their physique, healing, teleportation, etc. 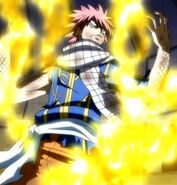 Natsu Dragneel (Fairy Tail) is a Dragon Slayer who possesses the Fire Dragon Slayer Magic. When he combined his power with Flames of Rebuke, he was able to enter the Dragon Force.

Link (Legend of Zelda series) is capable of using Din's Fire to damage all foes around him.

Amaterasu (Naruto), the deadly and unquenchable black flames of the Mangekyō Sharingan...

...like his brother, Sasuke Uchiha's (Naruto) can manipulate the black flames of Amaterasu...

Marco (One Piece) ate the Tori Tori no Mi, Model: Phoenix, which allows him to generate blue flames that can heal injuries and burn living fire itself.

The Ninja Tribunal (Teenage Mutant Ninja Turtles) keep a mystical fire in their forge that creates weapons for them and their acolytes.

Hiei (Yu Yu Hakusho) manipulating the Flames of the Underworld.