As a Magi, Aladdin (Magi) can absorb and manipulate the Rukh of this world to generate elements, mimic psychic perception and summon Djinn.

Wielders of this power can utilize the Prime Element to generate unique "particles" that can interact with esoteric elements. They can control elements of mystical/psionic/spiritual origins at the subatomic level. This process means that not only can wielders generate elements with ubiquitous properties, but also absorb and control existing ones.

While similar to Esoteric Element Manipulation, this power bypasses its limit by allowing control to all element types. It's also possible to convert regular elements via careful utilization of ambient ether.

As An Arcane Dragon, Acnologia (Fairy Tail) can manipulate Ether Nano to channel all element types, while normally a Dragon Slayer could only use one. 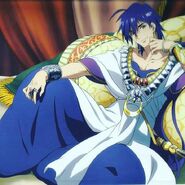 Sinbad (Magi)
Add a photo to this gallery
Retrieved from "https://powerlisting.fandom.com/wiki/Esoteric_Particles_Manipulation?oldid=1536723"
Community content is available under CC-BY-SA unless otherwise noted.