" We are currently able to manipulate our own reality, albeit in crude and imperfect ways, and our ability to travel through space is limited at best. It is likely that the only entity capable of ascending through this hypothetical echelon would be one that, by virtue of its very nature, must supersede anything that supersedes it. Such an entity would, as the end result of the logic of its creation, be forced to supersede itself, spiraling ever upwards through the tiers of reality, unable to break free from the bonds of its nature. Perhaps this entity may even someday supersede its creator, and become a host unto itself, the pinnacle above all other pinnacles. A tower that, as a part of its design, must be higher than every other tower, including itself. "
― Dr. Robert Scranton (SCP Foundation)

" It will, for a time. We may have forgotten so much about being human, but something we will never lose is our ability to change. Eventually, we will learn to keep up. One sunny day, we'll open our eyes and see nothing but creation below us, and nothing above us but ourselves, spinning out wildly into the great above."
― SCP-3812 (SCP Foundation)

The power to be in an endless state of transcendence. Not to be confused with Eternal Evolution. Variation of Meta Transcendence.

Users are in a state of constant and endless Transcendence. Transcending one's unique state of being; existence, nature, capabilities, abilities, etc, to the infinity with no limit or restriction to their potential while keeping the state of their individual nature maintained. Users don't just transcend themselves continuously but also transcend the things like concepts and the various levels of reality endlessly, essentially turning them into the supreme being of the transcended concept and/or the level of reality, seeing all lower levels of reality as if they were nonexistent fiction and all transcended concepts as if they're meaningless. The user will always exist above and beyond anything and anyone, superseding any and all beings on an even higher level then the user regardless of how strong they are or how great their authority maybe, completely dethroning and robbing other beings of their title of the strongest and breaking free from the laws, principles, or rules that make up any reality. Some users may even manage to transcend that weren’t meant to be transcended or perhaps was thought to be impossible to supersede, such as their own creators, writers, or their entire narrative.

The user will be able to accomplish all of this while not being able to transcend their individual nature and self-definition as a result of transcending everything will lead to total self-annihilation.

Because of not being able to transcend their individuality and self-meaning, the user will eventually have transcended all things in creation, existing beyond absolutely everything. Becoming a completely unrivaled force unmatched by the totality of all existence, leaving the user to continue transcending only themselves for all of eternity. 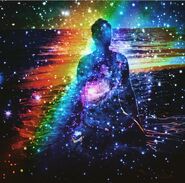 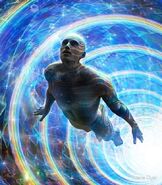