Amelia Voght (Marvel Comics) can affect herself as well as others.

Vaporize targets and then fuse them back together.

The power to vaporize oneself and/or objects and then fuse them back together. Not to be confused with Gas Transmutation and Vapor Transmutation.

User can cause objects, including themselves and/or other beings, atoms separate and lose cohesion, "evaporating" into the surrounding environment. They can either fuse target back together or sublimate target by fatally dispersing the atoms/molecules into nothingness. During the process of vaporization and fusing, target may move to a new location, which is why this is often mistaken for teleportation.

The Cheshire Cat (Alice in Wonderland)

By using her father Inviso Solution, Nash (DC Comics) transform herself into the new Mist. 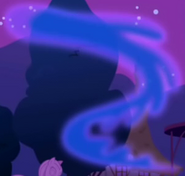 Ars Magia is an Ancient Magic that boils the blood and oxygen and melt the earth, August (Fairy Tail) mastered it to a degree that he can destroy an entire country, even disrupt magic.

Dracula (Castlevania: Lords of Shadow) can vaporize his body, making him less vulnerable to attack.

Caesar Clown (One Piece) can turn into gas due to his Gasu Gasu no Mi powers.
Add a photo to this gallery
Retrieved from "https://powerlisting.fandom.com/wiki/Evaporation?oldid=1412386"
Community content is available under CC-BY-SA unless otherwise noted.