Janemba (Dragon Ball Z: Fusion Reborn) is the result of all the evils of Hell condensed into a single being.

Become the embodiment of evil.

"You do not understand. I do not serve things evil. I AM...Evil. I am a Skin of Evil, left here by a race of titans, who believed if they rid themselves of me, they would free the bounds of destructiveness."
― Armus (Star Trek: TNG)

"I am the Rage, and the Bile, and the Ferocity! I am the Prince, and the Fall, and the Enemy! I am the Sin, and the Fear, and the Darkness! I shall never die! The thought of me is forever, in the bleeding hearts of men, in their vanity, and obsession, and lust! Nothing shall ever destroy me! NOTHING!"
― The Beast (Doctor Who)

"I have long since closed my eyes. My only goal is the Darkness."
― Sasuke Uchiha (Naruto)

The power to be the embodiment of evil. Variation of Disposition Embodiment and Malefic Force Manipulation. Opposite to Good Embodiment.

The user of this power is or can become the embodiment of evil and can manipulate everything evil, including having all evil powers and power over evil beings, places and events (The user literally become a force of nature). Examples include using weather to destroy towns, cursing people to induce horrifying effects, physically and psychologically torturing people, inducing sins, etc. The user can also do things like shapeshifting into a chaotic monster and do almost anything as long as it ensures death, destruction or pain on the victims. The user of this power is incredibly powerful because of the limitless capabilities and the fact that there is evil in almost every place. The user cannot be "killed" and can exist anywhere, but their existence is far stronger in some places than others as long as the place isn't overrun by a good embodiment user.

By nature somebody must always possess this power as evil has existed since the beginning of time and without evil, there cannot be any good.

Advanced users may also be able to possess people and other supernatural beings and give them some power. This is known to some as Demonic Empowerment. More advanced abilities include not only the ability to possess people, but also to possess land, objects and flora to manipulate the surroundings.

See Also: Made of Evil.

Aku (Samurai Jack) is made of evil, to the point that he literally cannot do something truly good even if it benefits him.

Tathamet (Diablo) is the original embodiment of evil.

Trigon (DC Comics) was formed into a personification of evil at the event of his birth when he absorbed all of the evil energies of Azareth.

Dark Man/Mr. Dark (Fables) is the embodiment of all that is malign and corrupt in the Fable Homelands

Devil Rebirth (Fist of the North Star) inherited the "Rakan Niō Ken" (Arhat Deva Fist), which is said to make him the incarnation of the Devil.

Azi Dahaka (Valkyrie Crusade) is the embodiment of evil.

The seven Shadow Dragons (Dragon Ball GT) and their progenitor, Black Smoke Shenron, are the embodiment of the accumulated negative energy spawned within the Dragon Balls.

Evil Jordan (Jordan Underneath) is the embodiment of Jordan's darkside with the intention of taking over. 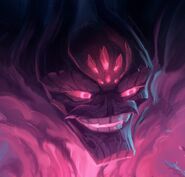 Caldia’s Orb (Marchen Awakens Romance) is a being born from the concentrated evil of humanity.

Loptr (Bayonetta 2) is Aesir's evil half in physical form. 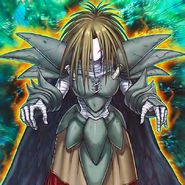 Unlike Guardian Eatos who is a creature of purity and light, Guardian Dreadscythe (Yu-Gi-Oh!) is a monster of darkness and evil.

Nyarlathotep (Persona 2), the embodiment of all of humanity's collective evil.

It's impled HATE (Glitchtale) is embodiment of both hatred and evil

Vaatu (The Legend of Korra) is the spirit of darkness and chaos, and thus the embodiment of all that is evil in the universe.

As the name suggests, the Idea of Evil (Berserk!) is a conceptual being that is the colective evilness of the humanity embodied
Português do Brasil
Community content is available under CC-BY-SA unless otherwise noted.
Advertisement