Janemba (Dragon Ball Z:Fusion Reborn) is a demon empowered by thousands of years worth of malefic energies, rendering him nigh-unstoppable

The ability to gain strength from evil. Technique of Evil Manipulation. Variation of Morality Empowerment. Opposite to Good Empowerment. Not to be confused with Malevorous.

Users become stronger, faster, more durable, etc. when they come in contact with evil and malice, including of oneself and others, possibly unlocking abilities related to the affinity and enhancing the existing powers. Some users may be able draw sustenance from evil or even slow or stop aging.

Black Lily's (Valkyrie Crusade) power is her own dark malice, so the more malice she has, more powerful she becomes.

Being a creature made completely out of evil energy, Orb (Marchen Awakens Romance) was able to absorb the darkness of human life to turn into a vile form. The ugliness of this form is the evil side of humans' hearts.

Malachite's (Steven Universe) power is the result of the abusive relationship between Jasper and Lapis Lazuli. 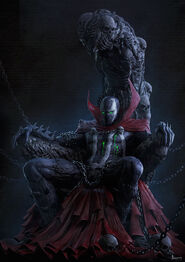 The demonic symbiote worn by Spawn (Spawn) can feed off ambient evil energy from the physical world around him, from creatures and even parts of the city that are more evil than others.

The Curse of Hatred (Naruto) was ideal to the Uchiha clan: when the object of their affection is lost, the love can instantaneously turn into hatred, leaving them more inclined to do anything and everything to achieve their goals, according to Tobirama Senju, they are "possessed by evil".
Community content is available under CC-BY-SA unless otherwise noted.
Advertisement