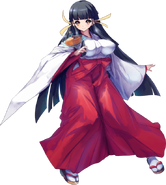 Maori Kasuga (Arcana Heart) comes from a clan of exorcists.

With his ghost powers, Danny Fenton (Danny Phantom) is able to exorcise ghosts from objects and people, ranging from ecto-rays to physically pushing the entity out of its vessel. 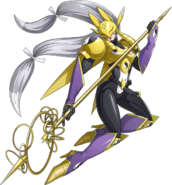 Lala's (Monster Musume) scythe, while too dull for use against the living, can physically seperate the connection between a spirit and the living world, forcing them to move on.

She-Ra (She-Ra and the Princesses of Power) exorcising Horde Prime from Hordak's body.

Ultraman Cosmo (Ultraman Cosmo)
Add a photo to this gallery
Retrieved from "https://powerlisting.fandom.com/wiki/Exorcism?oldid=1666194"
Community content is available under CC-BY-SA unless otherwise noted.