User can generate and launch a great number of highly explosive projectiles in a single blow. The bombs can be of any form and type (elemental, energy, psychic, gravity, etc.), possibly completed by additional properties like targeting, phasing or teleportation to increase their overall effectiveness.

This grant users extreme destructive capabilities, allowing them obliterate entire armies, wide territories, and even entire planets in a single wave. Projectiles may also be focused to quickly tear down the most resilient targets, or combined into an exponentially more powerful explosion. 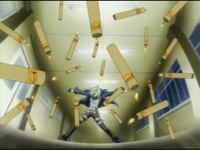 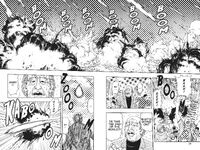 Bambietta Basterine's (Bleach) spamming bombs are even more vicious, as they make the target itself explode, bypassing protections. 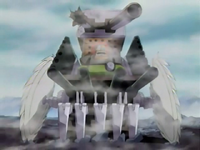 Jinpachi Munashi (Naruto) using a chain of explosive tags to create a wave of explosions that surround his foes.

Sakazuki/Akainu (One Piece) releasing a swarm of magma meteor fists to rain down on the field for massive and widespread damage.

Guila (Nanatsu no Taizai) bombarding the town of Vaizel with series of large explosions. 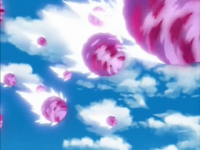 One of Zofis’ (Zatch Bell!) strongest spells Digan Teoradomu generates dozens of explosive energy balls to rain down on enemies.
Add a photo to this gallery
Retrieved from "https://powerlisting.fandom.com/wiki/Explosive_Hell?oldid=1606215"
Community content is available under CC-BY-SA unless otherwise noted.