Ideo (One Piece) uses the Destruction Cannon, an explosive punch.

The power to infuse explosive force into objects (usually weapons), beings, or powers. Sub-power of Explosive Attacks. Variation of Infusion.

The user is able to infuse objects (usually weapons), beings, or powers with explosive force, empowering and energizing them and allowing the user to manipulate their qualities and efficiency. 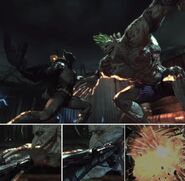 By coating his fist in explosive gel, Batman (Batman: Arkham) adds explosive force to a punch, enabling him to defeat the Titan-infected Joker.

Link (The Legend of Zelda) can create explosive arrows by infusing his arrows with bombs. 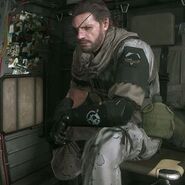 Don Krieg's (One Piece) Mighty Battle Spear is a 1-ton spear that creates an explosion with every impact.

Murray (Sly Cooper series) using his Dukes of Dynamite.
Add a photo to this gallery
Retrieved from "https://powerlisting.fandom.com/wiki/Explosive_Infusion?oldid=1375154"
Community content is available under CC-BY-SA unless otherwise noted.