Kensei Muguruma's Tachikaze (Bleach) creating air blades that causes whatever they slice through to explode.

The ability to combine slashing attacks with various explosive effects/forces. Combination of Explosion Inducement and Cutting. Variation of Slash Effect.

With a swing of his Bakusaiga, Sesshōmaru (InuYasha) can fire off explosive blasts of demonic energy that can easily destroy an entire horde of demons.

The Shibuki (Naruto) is a sword that causes explosions when slicing its opponents. 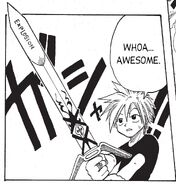 ...is capable of creating and producing powerful explosion attacks.

Krieg (One Piece) wielding the Mighty Battle Spear, which explodes proportionally to the strength of his swing.
Add a photo to this gallery
Retrieved from "https://powerlisting.fandom.com/wiki/Explosive_Slash?oldid=1502933"
Community content is available under CC-BY-SA unless otherwise noted.